What are the benefits of the Census?

What are the benefits of the Census? 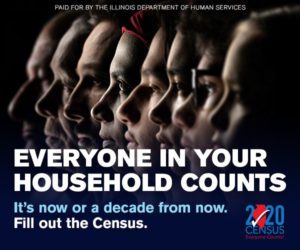 In the chaos of today’s world, it can be easy for people to feel like they don’t have a voice. There’s so much noise and turmoil, it can feel like it’s impossible to stand out and make a difference.

But there is one way for everyday citizens to change the world: fill out the Census.

That may sound farfetched, but it’s true. Even a slight increase in Census participation brings additional funds for programs and services that directly benefit and improve people’s lives. Census data is how the state of Illinois identifies ways to allocate federal funding and resources to different communities across the state, and here’s the thing: this money can’t be accurately distributed if the Census is not completed by everyone.

In the 2010 Census, for instance, approximately 1 million children ages 0-4 were undercounted. As a result, millions of dollars were not allocated that would have provided services for these children.

The Census is a critical exercise mandated in the Constitution and conducted every 10 years by the federal government to count the people living in the United States. The data collected determines how the federal government distributes funding to local communities, as well as representation in the U.S. House of Representatives. The Census provides reliable, accurate, and timely statistical information about the size, growth, and distribution of the country’s population, as well as its economic, social, and demographic characteristics. Census data also serves as a guide for planning and programs in both the public and private sectors.

Some other ways Census funding is used include: Early Start, Head Start, WIC, and SNAP benefits, school construction, ESL and special education programs, and free and reduced-cost breakfast and lunch programs in schools.

Funding as a result of Census data can also go towards transportation and infrastructure needs in specific communities. By accurately identifying the number of people living in a particular community, the government can better determine the residents’ transportation needs, such as increasing the number of buses or adding additional routes to better serve community needs.

And this is where the citizens come in: The Census is an opportunity for citizens to utilize their power and ensure that everyone is represented and receives equal treatment. More people completing the Census equals more funds to improve the community.

In the past, we’ve made the mistake of not urging others to fill out the Census. As a result, we’ve basically taken money out of our own pocket. To ensure this costly mistake doesn’t happen again, everyone needs to complete the Census — and encourage others to do the same.