Humboldt Park became a part of Chicago in 1869. The creation of Humboldt and several other west side parks was originally envisioned to provide a beautiful scenic escape from the congested city life. Originally marsh land, Humboldt Park became “the crown jewel” of the Park District. Housing the offices of famed landscape Architect Jens Jenson, considered by many to be the father of modern landscape architecture, Humboldt Park was at the center of the famed Boulevard system. After the Great Chicago Fire, settlement and development grew this prairie marsh into two-flats, bungalows, and small apartment buildings. 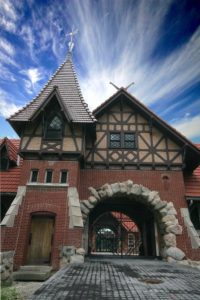 In the coming decades, large numbers of German, Scandinavians, and Italians moved in from neighborhoods to the east. Other nationalities, including Polish and Russian Jews, and Ukrainians, also began to move into Humboldt Park. By the 1930s and 40s the population grew to 80,000 residents. This was the highest number of residents living in Humboldt Park.

In the mid-1950s, Humboldt’s diverse neighborhood grew to include Puerto Ricans. On June 12, 1966 the first of two riots occurred in the community. The “66 Division Street Riots” were in response to the shooting of a young Puerto Rican man by the Chicago Police. This sparked a riot that lasted three days and led to the creation of many organizations that to this day struggle for social change in the community.

Art and Culture
With such a diverse history, Humboldt Park’s community has always been a mixture of different languages, foods, and traditions. Many world-famous Chicago artists and authors were inspired by this community, most notably, comedians, the Marx Brothers; authors L. Frank Baum (Wizard of Oz), and Saul Bellow (The Adventures of Augie March, and Humboldt’s Gift); to Gallery artist DZINE. On several streets you can see beautiful murals that tell the history of the community. Many of the murals date back to the 1970s and some are the oldest public art murals still in existence in the country.

Many of the murals tell the stories of struggle, survival, and equality. Since the 1990s community leaders and residents have banded together on several occasions to save many of the murals and restore them to their original glory.

If you have ever driven past Western Ave. or down Division Street, you will recognize the Paseo Boricua. Encased by two steel flags that are monuments to the Puerto Rican people, which mark the epicenter of the Puerto Rican culture in Humboldt Park and arguably the Midwest.

Humboldt Park Today
The community has seen many changes. It has had ups and downs but continues to strive as a neighborhood that is invested in stabilizing a place for its longtime residents and growing community. There are several community organizations that continue to be a voice for residents’ rights. Like the rest of Chicago, Humboldt Park continues to be a diverse area rich in history and culture.

For an official history of the Humboldt Park community, visit the Chicago History Museum’s Encyclopedia of Chicago.