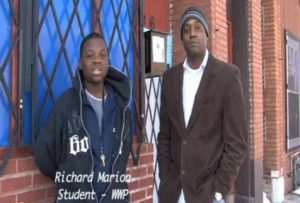 The Westside Writing Project is an organization that allows youth the opportunity to write in articles to voice our opinions and also work with digital media to create, edit and publish videos.

The Westside Writing Project has come a long way from where it originally began. When this project first started the job was for everyone to write a three paragraph article about current events or community issues and we compiled them into a short newsletter that was only four pages long. Now as to speak five years later, our latest newspaper was full color and was 20 pages long!! The articles inside were longer and more complex than our earlier editions.

Early in the year 2010 The Westside Writing Project was featured on the Real World television show on the CAN-TV network. While on the show, the host asked questions about the articles we wrote as well as our opinion on the latest subjects in the news.

After the CAN-TV project we were yet in another project. This project was a collaboration between the two sides of Humboldt Park the west and east sides, it was called “East Meets West”. The purpose of the project was to create a bridge between the two cultures and connect with one another using digital media. We were also trying to break the tension that was going on with the Puerto Ricans who resided in east Humboldt Park and the African Americans who generally lives on the Westside of Humboldt.