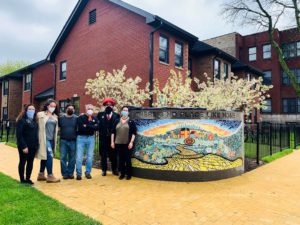 After almost a year of work, on Friday, May 15 Bickerdike Redevelopment Corporation hosted an unveiling of the There’s No Place Like Home mural broadcast through Facebook and Instagram Live. (view video here)

Over one hundred and twenty years ago, L. Frank Baum lived in Chicago, on the corner of Wabansia and Humboldt Boulevard when he wrote the beloved book, The Wonderful Wizard of Oz. Mr. Baum came up with the idea for the book while telling stories to children in Humboldt Park. In the 1950s the home was demolished, and years later, Bickerdike built one of the townhome buildings in our West Town Housing Preservation development on the site. To commemorate this world-renowned author, the importance of the story, and its connection to home, Bickerdike installed a yellow brick sidewalk along that corner.

In addition to the yellow bricks, a concrete mural wall was built at the corner, and bannered with the title There’s No Place Like Home.  The tile mosaic created by Chicago muralist Hector Duarte, in collaboration with the Chicago Public Art Group, was installed on the wall. Mr. Duarte was assisted by Alejandro Esquiliano and Edgar Lopez during the mural creation, and by Gustavo Sanchez and Cristina Macias during the installation.

The theme, There’s No Place Like Home, central to Mr. Baum’s story, resonates with the many families and individuals that face housing instability due to rising housing costs. Now, over a century after Mr. Baum called Humboldt Park home, the location at Humboldt & Wabansia is home to nine families, and the rehab of West Town Housing Preservation was presented the Polk Bros. Foundation Affordable Rental Housing Preservation Award at the 26th Annual Chicago Neighborhood Development Awards.

For media inquiries, contact our Communications Manager, Libby Julia-Vazquez at 872.772.0332 or ljvazquez@bickerdike.org.