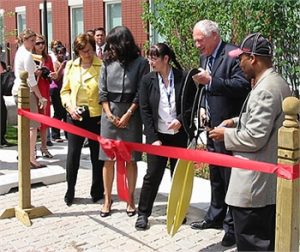 The building at 541 N. Homan St. is the largest of eight within three-quarters of a mile of one another in West Humboldt Park.

Rosa Parks Apartments will consist of eight pre-cast masonry buildings erected on vacant land, clustered on six blocks within three-quarters of a mile of one another, offering one- to four-bedroom apartments for families with maximum household incomes of $23,000 to $38,000. All units provide central air, laundry, Internet and cable wiring, and community and exercise rooms.

During a grand opening ceremony held June 10 at the largest building, 541 N. Homan St., Gov. Pat Quinn led off with references to the Chicago Blackhawks’ Stanley Cup triumph the night before. “We had a good night last night, we’re having a great day today, and we’ll have a parade tomorrow,” Quinn said. With people losing their homes due to foreclosures, “It’s important that we fight back with all of our resources and all of our creativity,” the governor said. “We have an ethical duty to provide housing to everyone. The Blackhawks won because they banded together as a team. They did it because they believed in each other.” The legacy of the building’s namesake is carried forward every time affordable housing is built, Quinn said. “This building is named after a special person in American history,” he said. “She never succumbed to the idea that separate-but-equal was O.K. Rosa Parks would not move to the back of the bus. She said, ‘That’s not right.’ … Many other walls have come tumbling down because of that good work.”

Ald. Walter Burnett (27th), in whose ward Rosa Parks Apartments is located, expressed pride in the project and said it fills a strong need. “Everyone deserves a decent and affordable place to live,” he said. “You should have seen the line of people waiting to get into this project.”

Buildings have energy-efficient heating and cooling systems, and the largest one – with solar hot water, rooftop gardens, low-flow fixtures, permeable pavers and other features — will be LEED Silver certified. Staff are giving residents information about these green-oriented components and how to maximize their use.  “I heard all the great things about energy efficiency, use of water and having affordable units for people to live in,” Quinn said. “This is a green building because it acts green every day.” ‘Lasagna Financing’ Bill Eager, deputy commissioner of development finance for the city Department of Community Development, said he’s counted up to 12 different sources of financing for the Rosa Parks Apartments, including four city programs. “It speaks to the willingness of many different groups to come together,” he said. “These deals are not always easy to do.” Dignitaries prepare to cut the ceremonial ribbon on the project, supported with about a dozen layers of financing.

The Illinois Housing Development Authority invested about $12 million in the project, $9.5 million from the federal stimulus package, said Gloria Materre, executive director. “It’s lasagna financing. Everybody is involved here,” she said. “Who says stimulus money isn’t being put to work?” Materre added that funding from the American Recovery and Reinvestment Act has gone toward 1,750 affordable rental units in Illinois alone. “So many projects are halted because there’s no financing,” she said. The private sector has been involved as well. “Bickerdike raises the bar on affordable housing,” said Katherine Mazzocco, vice president of funder Harris Bank. “I’m looking forward to excellent results from this building.” “Some of these deals only work with investors and our partnerships in the banking community,” added Joy Aruguete, executive director of Bickerdike. “It’s not easy to get people to take the risk.”

Burnett tipped his cap to NCP lead agency Bickerdike for pushing the envelope of affordability. “They try to get the most affordable housing they can get,” he said. “They don’t limit themselves to the state’s policy, to the federal policy. They go beyond that to serve the people there’s no policy for. … Bickerdike makes it look so easy, just like the Blackhawks made it look so easy. This is not an easy thing.”

Residents are being educated on all the eco-features.

The results are well worth it for residents like Shalamar Southward, a resident of the 521 N. St. Louis building, who moved in January and described herself as “a single parent getting things in order” and a University of Illinois graduate. “I’m just trying to move forward,” she said. “I was surprised that I got called. … This is a new start for me.” Barbara Buford, who lives in the 3941 Ohio St. building, read from a winning essay her daughter, Lashunda, wrote called, “Changes in the Community.” “It starts with ourselves, being willing, able and ready to make a change,” Buford read. “One voice cannot be heard. It will take a pack of hyenas to be heard.”