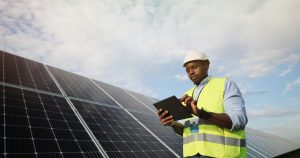 Additionally, the IUBDC companies supported an average of nearly 20,000 jobs every year from 2017-2020, providing a total of $1.1 billion in employee wages.

“Businesses owned by people of color, women and veterans are playing a major role in the efforts of all Illinois utilities to modernize energy infrastructure, meet the evolving needs of customers, and support the transition to clean energy in Illinois,” said Joe Dominguez, CEO of ComEd and 2021 Chairman of the IUBDC Board of Directors.  “The IUBDC is evolving in its efforts to help diverse suppliers navigate the procurement process of Illinois utilities, providing mentorship and forging partnerships that lead to opportunities, which is more important than ever. These in-state businesses have the necessary capabilities, they just need an opportunity to demonstrate it.”

“The IUBDC has become a strong voice for diverse suppliers in Illinois and its members are national leaders in supplier and workforce diversity spend and initiatives,” said Bocanegra. “We commend this effort to dig even deeper and assess the economic impact of increased spending with diverse suppliers, and we remain proud of the work, progress, and efforts the Council has undertaken since its inception.”

ComEd, along with Ameren Illinois, Aqua, Illinois American Water, Nicor Gas, Peoples Gas and North Shore Gas, formed the IUBDC to advance the effectiveness of business diversity initiatives among their respective utility companies, and to encourage diverse businesses to forge effective working relationships with utilities. The goal of the IUBDC is to help develop a strong economy and create a productive environment for growth and access to diverse businesses. Since 2014, all electric, gas and water companies under the jurisdiction of the Illinois Commerce Commission with at least 100,000 customers report annually in April on their procurement goals and actual spending with diverse suppliers. The most recent numbers demonstrate IUBDC’s effectiveness, according to Charles Matthews, president and CEO, Peoples Gas and North Shore Gas and former IUBDC chairman.

“The goal of this coalition was to come together and collaborate on additional ways to make a positive impact,” said Matthews. “The IUBDC is proud to have a large impact when it comes to partnering with minority-owned, women-owned, and veteran-owned businesses and we will continue to look for new and innovative ways to continue to grow this impact.”

For more information about the IUBDC and to view the full report, visit iubdc.com.