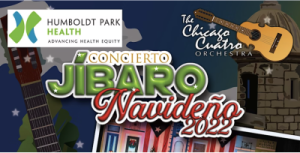 Yoraué was born on May 29, 2017 with the dream from Aurea Alicea, Johanna Centeno, Ramón Pérez and Héctor Ortiz to create a workshop to give a new musical and vocal spin to indigenous music from Puerto Rico. Together they gathered excellent musicians with the same love and passion form music, and in June same year they had their first live performance. To this date, Yoraué has performed in several towns around Puerto Rico and recorded 4 studio singles. In their repertoire they have original songs and also songs from other Puertorrican composers and genres like plena, salsa, and nueva trova as well as Christmas music.

And Chicago’s very own, The Chicago Cuatro Orchestra!

The Chicago Cuatro Orchestra Project (CCOP) is a recognized 501(c)3 educational not-for-profit organization dedicated to enriching lives through music; specifically, through the music of Puerto Rico’s national stringed instrument, the cuatro.  The CCOP lives out this mission by providing high quality music education thereby developing the next generation of talented cuatro musicians.  CCOP also conducts community outreach events educating the City of Chicago at large of the influence of the cuatro on Puerto Rico’s rich cultural heritage. CCOP provides quality music education to disadvantaged youth regardless of an individual’s ability to pay; CCOP does not charge students for the lessons they receive. CCOP instills the following principles in its staff and students: integrity, service above self, dedication, aspiration, respect, and discipline.

Since 1996, The Chicago Cuatro Orchestra has performed its signature blend of Latin American rhythms featuring the unique sound of Puerto Rico’s national stringed instrument, the Cuatro! The Chicago Cuatro Orchestra has performed at Chicago’s most important cultural venues such as The Chicago Symphony Orchestra Center, The Auditorium Theater, The Chicago Theater, Grant Park, Copernicus Center, Field Museum, Museum of Science and Industry, Chicago Cultural Center, Chicago Public Libraries, and the Harris Theater at Millennium Park. The orchestra has traveled to Puerto Rico and performed at the most established Cuatro festivals in San Juan, Hato Rey, and Cayey. The orchestra has also toured to several of our nation’s universities to deliver cultural musical performances.