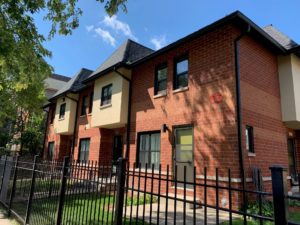 West Town Housing Preservation, formerly two developments known as West Town Housing Phase I and Phase II that were originally built in 1983 and 1988 respectively. The development consists of 318 units, across 68 buildings located in the rapidly gentrifying communities of Humboldt Park, Logan Square, and West Town.

In 2017, Bickerdike began the two-year rolling rehab project, requiring residents to relocate for approximately 30 day periods. Residents returned to their homes to find:

West Town Housing Preservation is a huge success story but many preservation challenges lie ahead for Bickerdike and for the affordable housing community. ~ Joy Aruguete, Bickerdike CEO

The Chicago Neighborhood Development Awards is commonly referred to as the Oscars of the development world because it recognizes outstanding achievement and innovation.  We’re happy to have our work be highlighted and proud to be in such great company. You can watch the virtual event here. Bickerdike’s recognition is on the first evening & begins at 25:20 .

Bickerdike has won two previous CNDAs. In 2015 we were awarded the same preservation award for the rehab of our 1704 N. Humboldt Building, and in 2003 they were named Non-Profit Neighborhood Development Group of the Year.

Watch the video below to learn more about the award and the project.