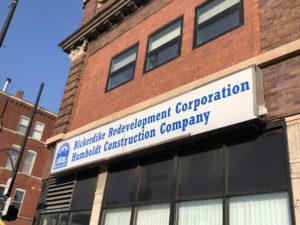 Many people ask us about our name. They sometimes find it hard to pronounce. Other times they ask why our founders chose it and what it really means. We are named after a daring and visionary man named George Bickerdike (b. 1806-d. 1880).

Born in Yorkshire, England, Mr. Bickerdike emigrated to the U.S. in 1833. A carpenter by trade, he worked in Cincinnati, Ohio and Fort Wayne, Indiana before riding solo on horseback to Chicago where he purchased land and built his own carpentry shop. He watched the value of that land steadily rise as Chicago grew and sold it to buy 80 acres in what is now known as Oak Park. There Mr. Bickerdike constructed a lumber mill on the banks of the Des Plaines River and again sold the land for a good price to buy 84 acres in today’s West Town; he subdivided that land with the idea of building homes. It is that parcel of on the near northwest side of Chicago where many of Bickerdike’s first properties arose in the late 1960s and ’70s and still stand.

Our founders had their own vision of themselves as re-developers of George Bickerdike’s land to put it in the hands of hard working families who had, by that time, long called it home.

This year we are honoring our founders and all who worked after them for a half century of community inspired development. You can join us at our 50th Anniversary Gala Celebration on Thursday, May 17, 2018. Visit our website for more information, to purchase tickets and for sponsorship opportunities..